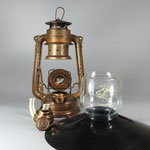 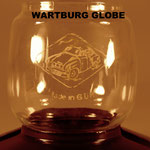 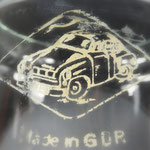 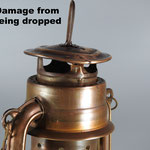 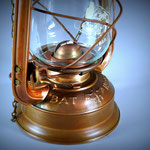 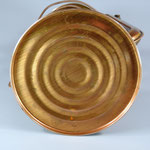 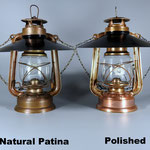 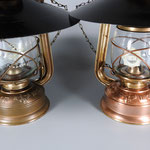 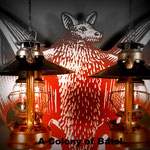 This is my second Batela that was made with Tombak.  This has only been lightly cleaned.  It was not shined with metal polish.  The appearance is likened to a dark brass.  This Batela has damage on the top of the chimney from being dropped and I was unable to fix it because the support underneath is too damaged.

The special Globe is a 'WARTBURG' special Edition globe and was an 'accessory' item for the Batela's.

The Batela has been electroplated with Tombak, which is a copper-zinc alloy. Tombak was used as a corrosion protection.  The well-known BATELA has a chain and a black umbrella. It was originally sold in a round cardboard box with the town view of Scharzenberg as the town would have looked like in the year 1627.


There were two Tombak coated lanterns which were available on the market after 1970.  Both are based on the BAT158.  One was referred to as a BATELA and the other one (usually colored and varnished) was referred to as the BATOLA.  One can say that BATOLA and BATELA were the same lanterns as it was up to the carrier - seller who made that decision. Depending on the export area, one or the other name was used.