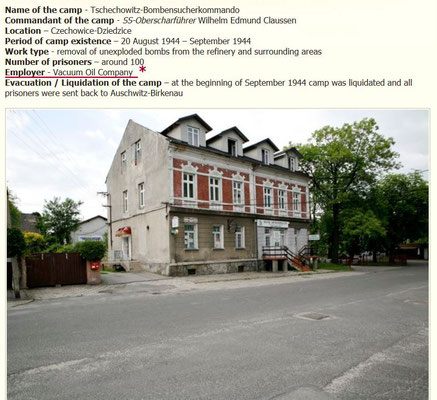 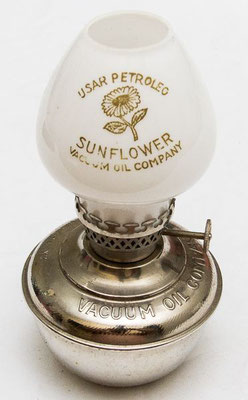 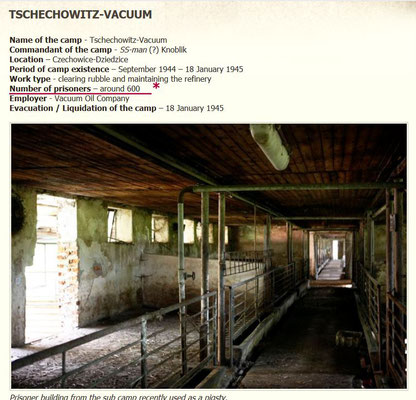 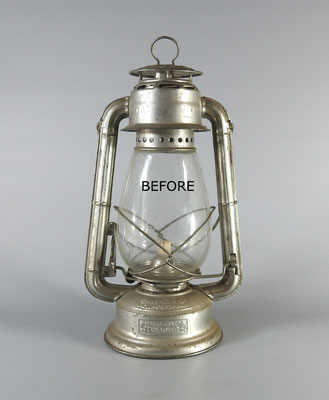 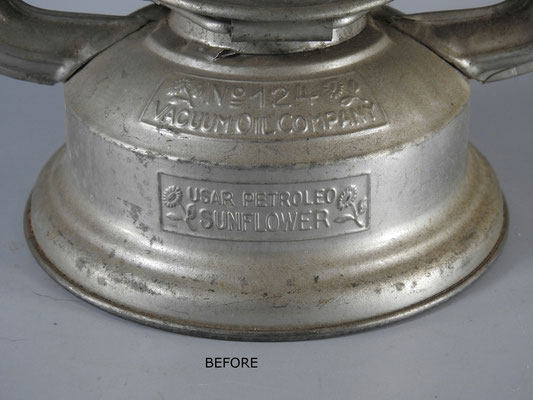 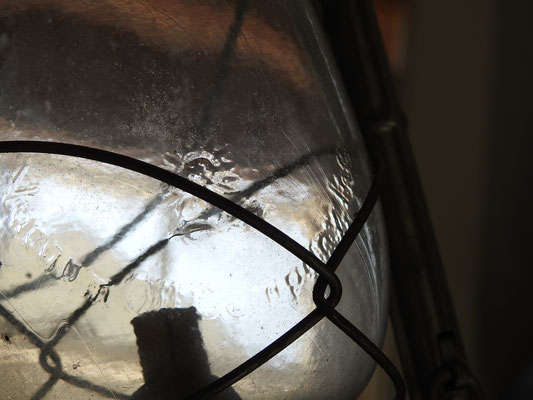 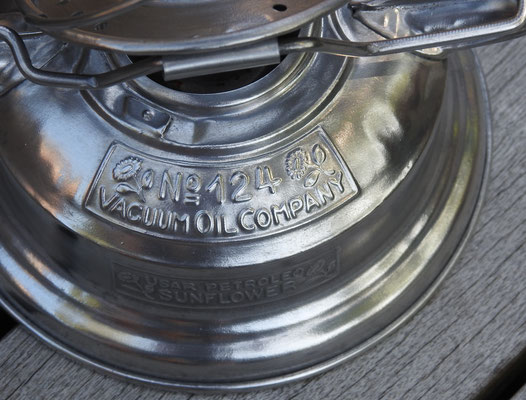 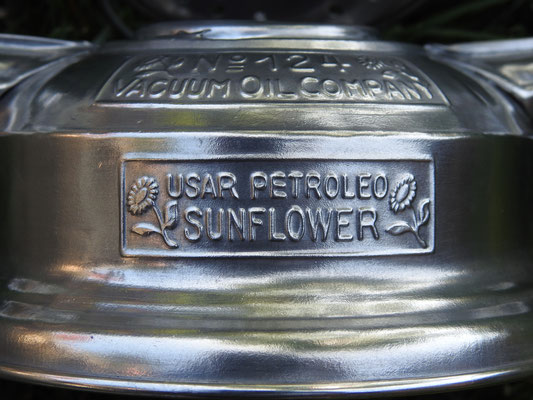 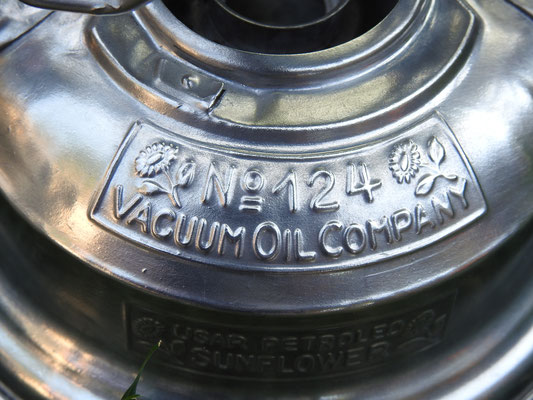 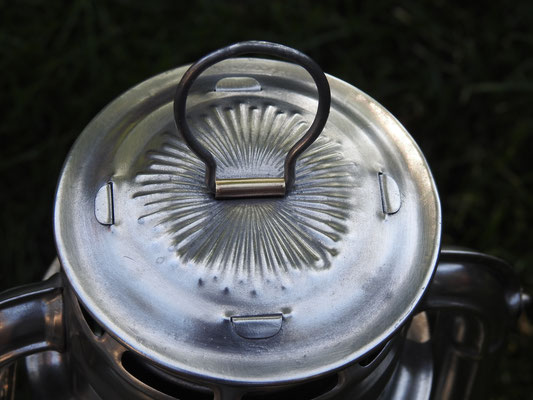 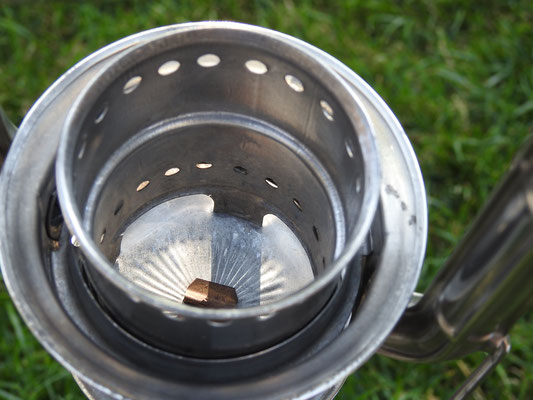 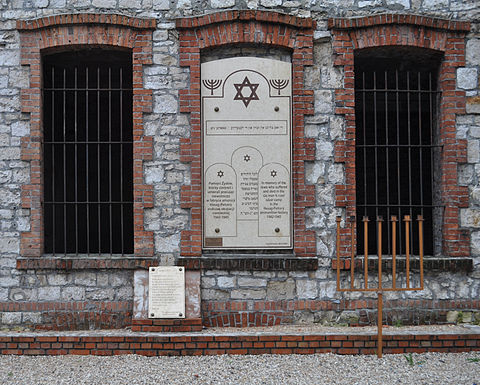 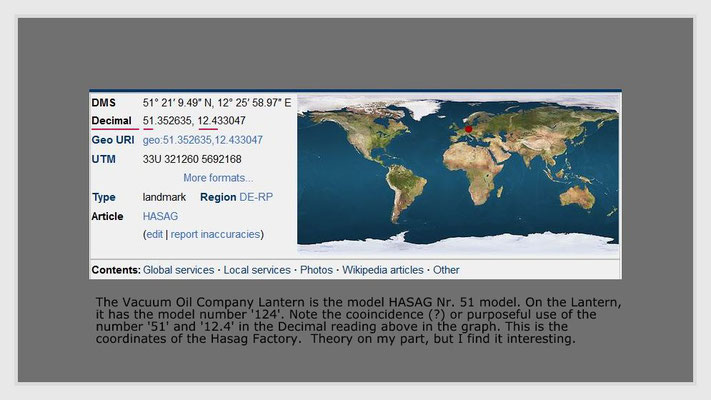 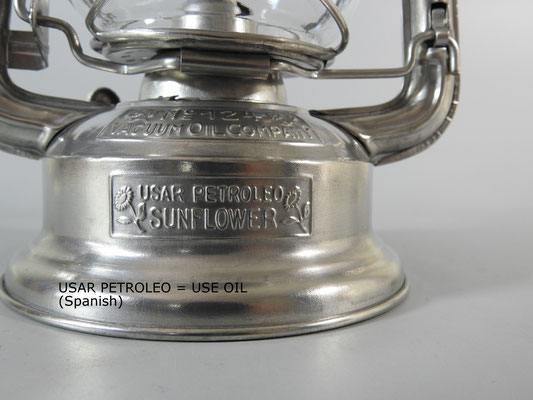 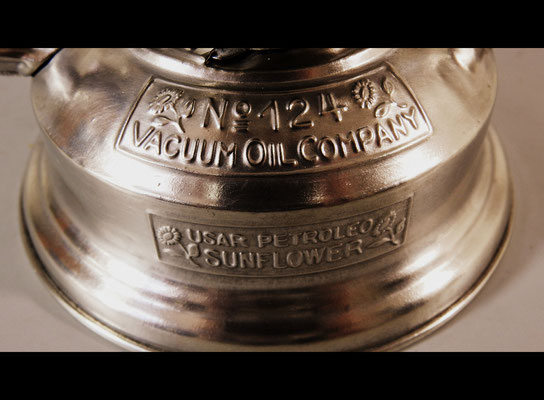 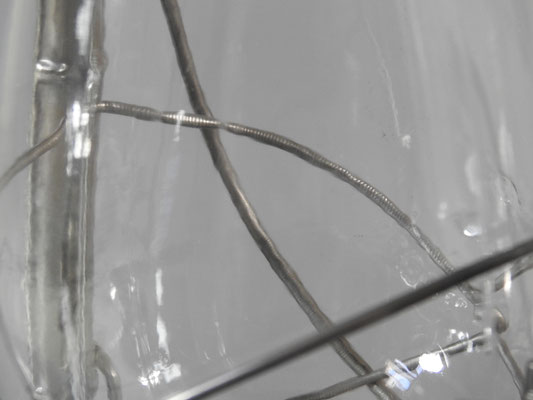 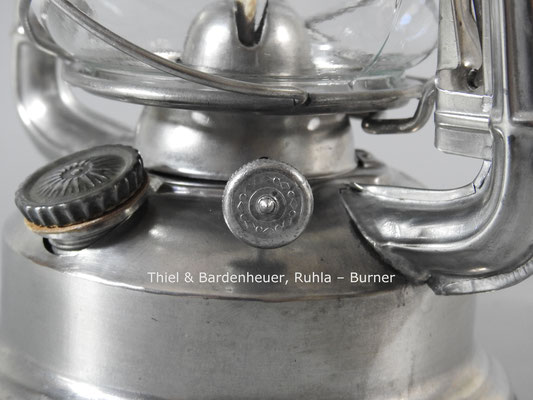 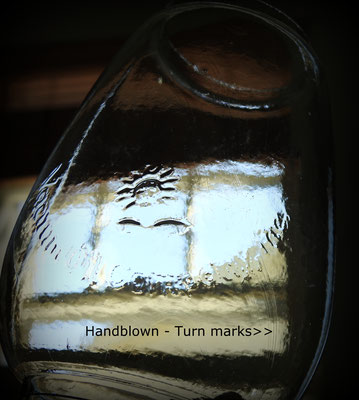 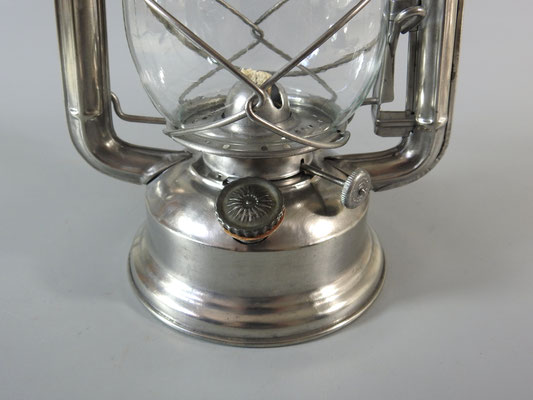 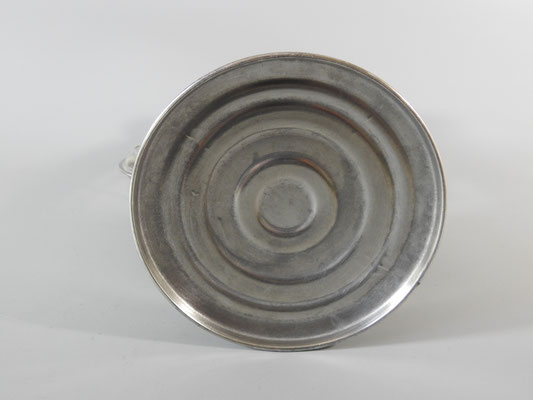 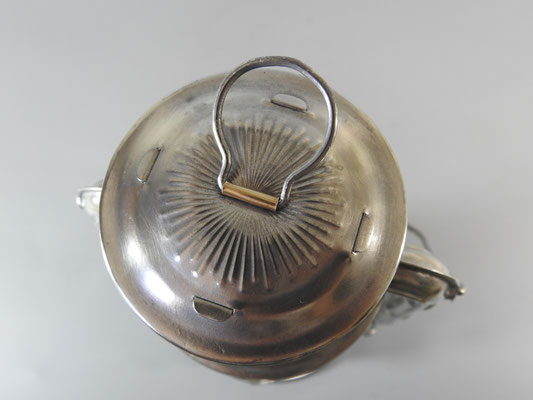 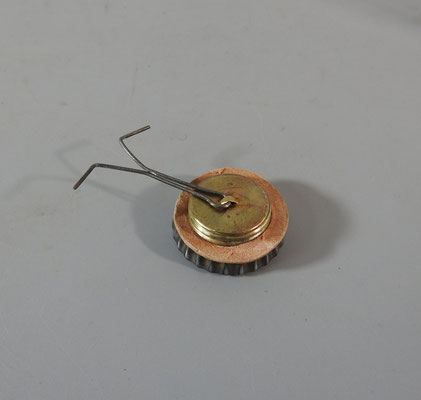 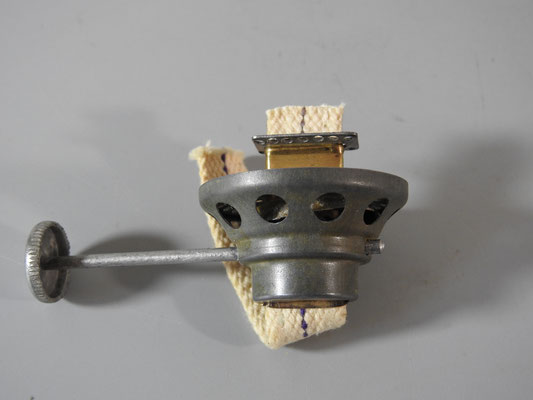 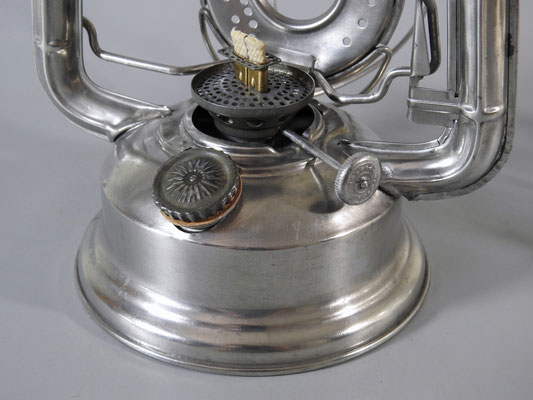 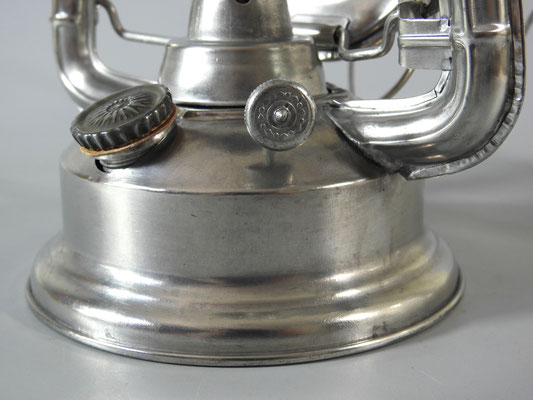 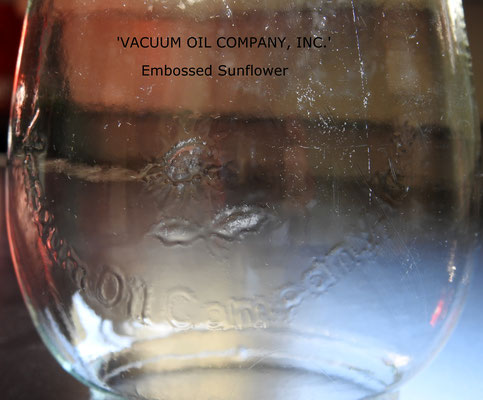 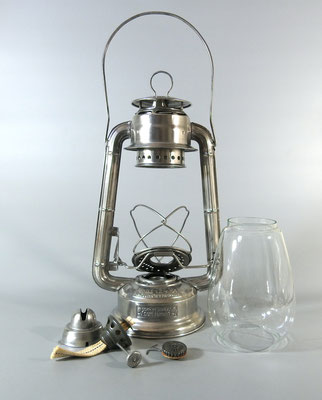 This is New Old stock - never lit; never fired up.

This is a very fascinating lantern with a lot of history. It was in Lisbon, Portugal. Manufactured by Hasag, this is the Hasag Vulcan Model Nr. 51. "Vacuum Oil ceased to exist as a Company in 1932 so it would have to predate that. HASAG 51 was around in 1926 because Pifco were selling the model then so we can for sure spot the Sunflower Hasag 51 to about the five year period 1926 to 1931." *Source "Classic Pressure Lanterns

For more than one hundred years the Czechowice Oil Refinery, formerly the Vacuum Oil Company, owned by the Standard Oil Company of New York, a United States based company, has been producing petroleum products for industrial and commercial applications. Many of the refinery’s products are specialty items such as semi-synthetic motor oils, hydraulic oils, high temperature lubricants and waxes. The history of the refinery dates back to 1896 where the refinery processed approximately 35,000 metric tons of paraffinic crude oil a year in the production of vacuum oil. Over the next several decades the refinery’s capacity steadily increased with production exceeding 500,000 metric tons per year.

During the early 1930s, the addition of several new product lines and processes transformed the refinery into the largest petroleum processing facility in Poland. With the onset of World War II, the refinery became a military target of the Allied Forces. Due to its high production and strategic location, the Allies

bombed the facility in August of 1943. While under German occupation during the war, the Germans rebuilt only part of the refinery; the Poles completed the major restoration shortly after he end of World War II. Full scale production resumed in February 1946 (Czechowice Oil).

During World War II, the Tschechowitz I & II subcamps of Auschwitz in Czechowice-Dziedzice provided forced labor for Vacuum Oil Company facilities in Poland which were captured and operated by Nazi Germany.[4] In 1955, the company became Socony Mobil Oil Company. In 1963, it was renamed Mobilgas, later shortened to Mobil.

Other items that exist are the Califorix Heater marked Vacuum Oil Company/Hasag as well as camp stoves and other lamps. There was most definitely a 'hand holding business connection between the Vacuum Oil company and Hasag.