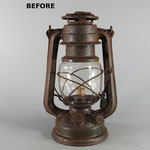 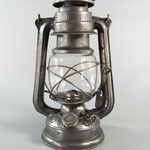 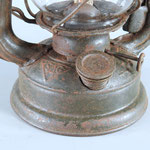 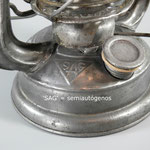 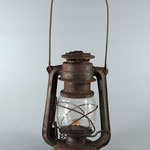 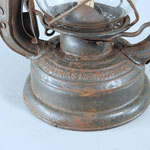 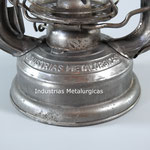 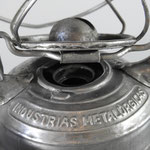 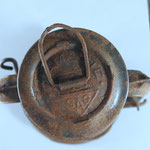 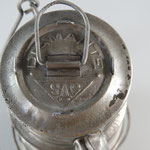 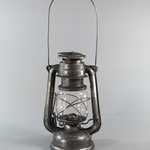 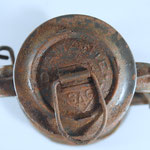 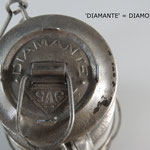 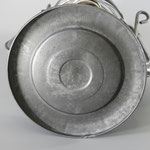 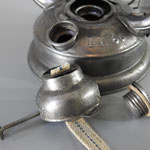 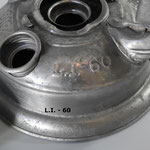 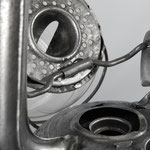 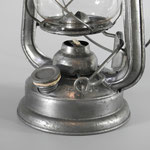 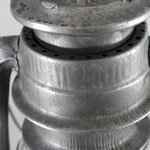 UNKNOWN MAKER. POSSIBLY MEWA (HASAG). This lantern came from Spain.  On the fuel tank it is embossed 'INDUSTRIAS METALURGICAS' which translates to 'METALLURGICAL INDUSTRIES'.  The original paint, which is RAL 6006, could not be saved due to the amount of rust. The burner is, if not 100%, identical to a *MEVA lantern. *NOT TO BE CONFUSED WITH 'MEWA'. MEWA did have the machines from the old Hugo Schneider factory.

On the opposite side of the fuel tank it has the SAG Logo and the model 'L.I. - 60'. Possibly not even the model number, but an inventory number for the lantern meaning which Mill it was used in. It is not known at this time. 'SAG' stands for 'SEMI-AUTOGENOUS'.

Mills that grind hard ores with fracture characteristics that do not lend themselves to fully autogenous milling are charged with a small amount of steel balls to assist in the size reduction. These are known as semi-autogenous grinding (SAG) mills. In the mining industry all of these types of mills are in use.

On the top of the chimney, it has the SAG Logo and the word 'DIAMENTE' which translates to 'DIAMOND'.

RESEARCH - THEORY WITH THIS LANTERN

Despite lacking cash, oil and other supplies, Francoist Spain was able to supply some essential materials to Germany. There was a series of secret war-time trade agreements between the two countries. The principal resource was wolfram (or tungsten) ore from German-owned mines in Spain. Tungsten was essential to Germany for its advanced precision engineering and therefore for armament production. Despite Allied attempts to buy all available supplies, which rocketed in price, and diplomatic efforts to influence Spain, supplies to Germany continued until August 1944.

Most of the contraband trade involved industrial diamonds and platinum, both in short supply in
Axis Europe, but available in Africa and Latin America. Industrial diamonds, used in precision machining, were critical to the armament, aircraft, automotive, and mining industries. As evidence of their value to the Axis, at the height of the trade in 1943, black market prices for diamonds in the Iberian peninsula were 20 to 30 times the commercial rate, and the U.S. Embassy in Madrid reported that supplies of between "200 to 1000 carats per week" were available on the Spanish black market.

Platinum was used in electrical contacts, heat elements, electrodes, and x-ray and radio tubes, and was an important catalyst in a host of chemical processes including the making of nitrates and sulfuric acid. Black market prices on the Iberian peninsula at the height of the trade in 1943 were 11 times the commercial rate.

It is also very possible that this lantern was used in Argentina who also had the SAG Milling process and a relationship with Germany.  It is well documented that Argentina supplied Germany with Diamonds and Platinum.