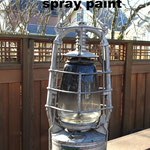 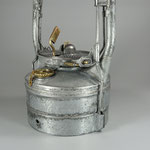 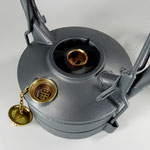 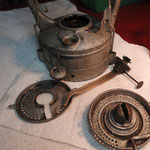 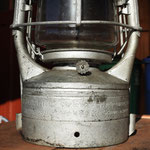 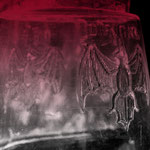 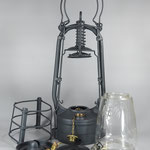 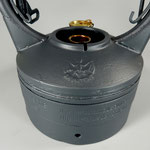 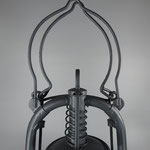 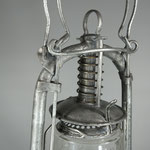 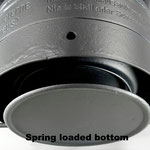 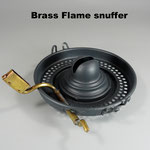 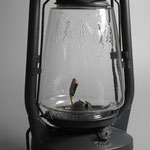 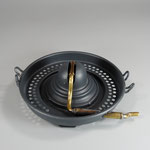 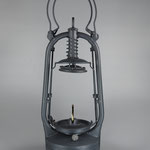 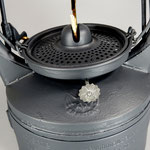 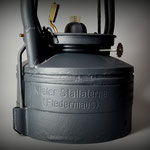 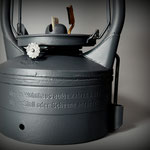 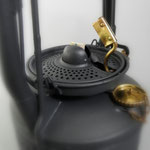 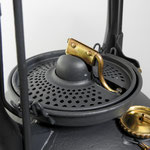 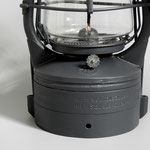 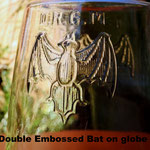 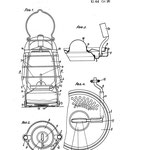 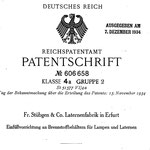 This unique lantern was manufactured sometime between 1934 - 1937 by Stübgen & co.

Fr. Stübgen was commissioned by the "Schleswig-Holsteinische Landesbrandkasse" on the basis of a police/fire ordinance. Fire Insurance companies would only sell a Fire Insurance policy to a farmer who owned this lantern. It was compulsory for 'stables' to have this lantern.  There are 3 known models of the Kieler Stallanterne.

The lantern was only available in Schleswig-Holstein. The insurance companies worked with Stübgen & Company for approximately 7 years designing and developing this complicated lantern.  'Kiel' is a city in

When I purchased this lantern, it had multiple coats of silver spray paint & green paint. The original finish underneath the spray paint is a special coating of zinc paint. This lantern was not meant to be 'pretty' so the original finish is not smooth; rather rough and industrial. I did not know that the Zinc Paint would react to the Citric Acid bath that is was submerged into for rust removal. The Zinc paint 'melted' and was largely dissolved.  The only option was to continue stripping off the rest of the paint, sand and *refinish.

The color paint on the Kieler is RAL 7016 - Anthracite grey.   * I can not take credit for the beautiful

and meticulous paint job. It was professionally restored by a talented man who asked to remain 'nameless'.  (THANK YOU LES!)

Another issue was, because of the patented design of the tank is that once you put water in, it is virtually impossible to get the water back out.  Tipping the lantern upside down does not help (that is a safety feature so that Kerosene won't leak out).  It took over a month to get the lantern dry inside.

How does this work?

1.   The special glass globe is embossed with two bats; one on each side of the globe.  The

"Double Bat" globe was made for this lantern only.

2.  The wick insert has a slot which is to prevent anything falling into the lantern.

There is also a tube attached which goes to the bottom of the lantern.

3.  The fuel hole also has a tube. It is curved and goes into the center/bottom of the tank.

4.  You can NOT take off the brass fuel cap without removing the glass and the burner

components.   Notice the metal piece which lays tight on top of the fuel cap.

5.  Above the glass globe, there is a perforated 'cap' to prevent sparks from coming out.

6.  The plaque on the front reads:

Which approximately translates to:      Only store and light up in the house.

Never light up in the stable or barn.

A special thank you to Hans-Werner and Henk Kloosterman for providing much of this information.