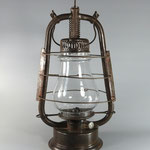 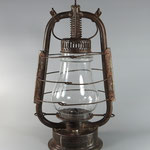 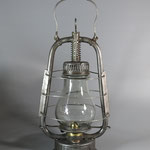 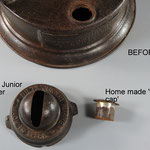 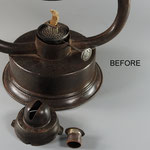 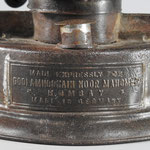 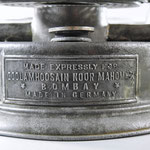 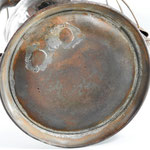 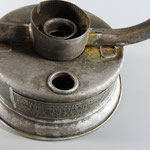 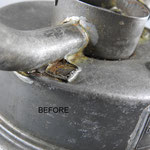 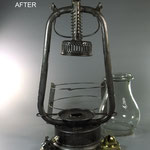 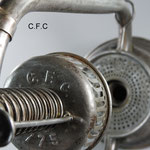 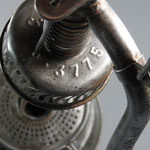 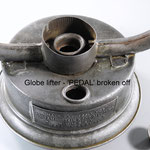 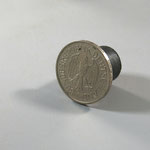 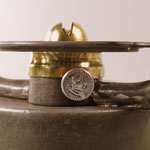 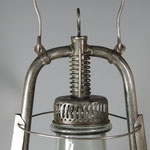 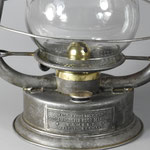 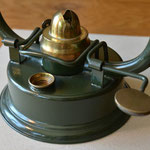 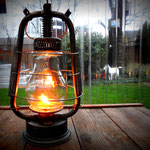 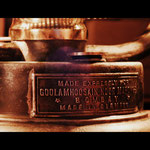 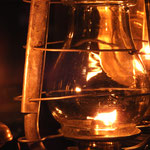 *This is also a possible very early Nier  - PLEASE SEE ADDITIONAL INFORMATION REGARDING THIS BELOW.*

This lantern came from India. It is a very early spring top lantern. Initially I thought it was  Heinrich Friedrich, but after having a more experienced expert look it over carefully, it was determined it is most likely a MAX OTTO FRIEDRICH lantern.


It arrived with a Dietz Junior Burner cone and a hand made 'fuel cap'. The Feuerhand burner was frozen with frozen with rust, but eventually freed. This would not have been the original burner and and most likely a Thiel and Bardenheuer burner.  The lantern also had an ill fitting globe in it. It now has a very old German clear glass globe that fits perfectly.  Now, the other possibility is if it is a Nier, that the burner might be original, but then the dating would be 1914 as that is when the Feuerhand Logo was patented.

I do not know if the globe guard cage is original or not. My opinion is that it is not, but was made by someone in India. The reason for that is due to the difference in metal between the cage and the lantern.

The fuel cap you see in the photos with the German coin will have to suffice for now. The Brass Burner cone was purchased from another collector and also fits perfectly.

It is missing the main globe lifter ('pedal') as seen on my Heinrich Friedrich lantern. It has obviously been broken off.

"The same type of glass lifter was already protected by Frank in 1893 by a DRGM. In the same year the Friedrich company advertised with the same glass lifter. You paid to Frank Royalties and that was it. In 1896 Friedrich came up with his own protected glass lifter on the market. The Nier company, which only existed from 1902, reported in It should be taken into account that the lifters from Frank and HEINRICH Friedrich had the same basic functionality as the 1901 lifter from Nier, but actually used an external actuator. (At least that's how I watch it). Niers lifter is a central lifter with central actuation. Unfortunately, the DRGMs with images have been destroyed and the traditional abstract wording is quite general, so there is room for interpretation.

The lantern shown to me, which led to appropriate confusion, is of a later date, from MAX Friedrich. At this point in time, i.e. after 1907, Nier's DRGM protection had expired, and apart from the DRGM used by Max Friedrich with regard to the upper perforated ring, it is therefore unclear whether it was actually assembled in Friedrich's metal goods factory, because there are several indications also for Nier. It's a fine example of the difference
between evidence and evidence. Just because this lifter appears on one of Friedrich's lanterns does not have to be general for other lanterns.

The protective right regarding the blaker with perforated screen was a DRGM, not a patent. It regularly expired in 1910. An extension of the patent for another three years could not be found. Nier or any other manufacturer could therefore also produce it from 1910 onwards."

The design of the blaker with the air holes goes back to a patent by Max Friedrich. The number is written on the blaker.

Max was a descendant of Heinrich Friedrich and ran the company for a few years shortly before it went bankrupt.

It is not entirely certain whether Friedrich was still manufacturing his own lanterns in Beierfeld at this time. Friedrich produced general household goods and also distributed products from surrounding small craft businesses. He was not a specialist only for storm lanterns.

Since the lantern has a glass lifter that was typically used by Nier and was originally patented there, it is possible that this lantern was produced by Nier for Friedrich's company at a late date. This is an option. Another possibility is that Nier's patent was no longer valid at the production time of Friedrich's use.