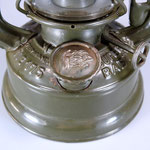 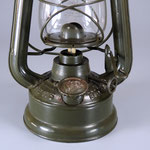 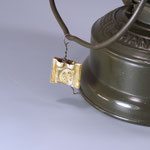 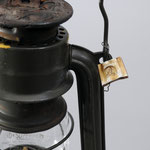 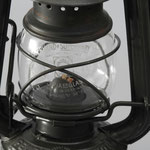 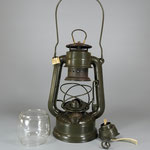 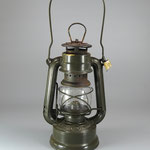 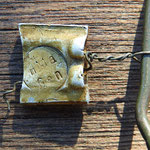 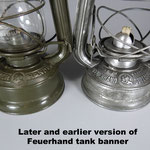 This lantern was made from 1939 and onward. It can be identified by the modified tank logo.  In addition, after 1939 the lanterns were no longer tinned due to the war.  The lanterns were then painted in a dipping and spraying process.

All of the paint (RAL 6006 matte)  is original and there was no indication (rust) that this lantern had been left and/or used outside.  The chimney is in poor condition due to heavy use and the lantern slightly leans.

Attached to this lantern is a German War relic which is part of a German Rifle Striper brass clip.   The lantern and/or metal tag is most likely  a 'Veteran Bring Back".  I have left this metal piece attached as it is part of the lanterns history and I do not support or endorse the symbolism. On one side of the metal stamp it reads: