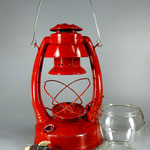 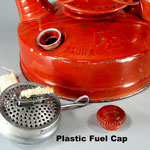 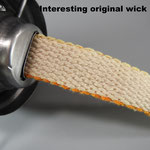 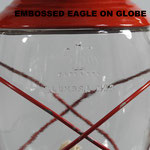 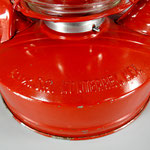 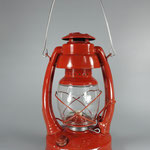 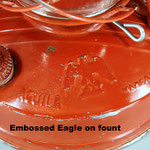 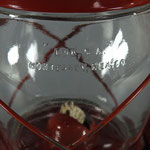 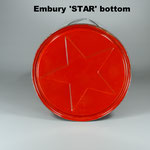 When Dietz bought the Embury Company in 1953, the tooling for the Air Pilot lanterns was sold to a stamping company in Monterey, Mexico.  Lanterns that were made in Mexico with the old tooling show up rarely.  I do not believe that many of these lanterns were produced and/or survived.  The lantern can be identified by an Eagle logo on the globe and tank. *On the W.T. Kirkman website, the Eagle logo is stated to be an Aztec logo.  That would be incorrect.  'Aguila' = Eagle in Spanish

What became of the tooling or stamping company in Mexico in unknown.

This is identical to the Embury Air Pilot.  It is notable that the fuel cap is plastic.  The paint that was used is inferior in quality to the paint that is on my Embury and Dietz lanterns.  This lantern is in overall very good shape with all original parts.  Some of the paint has oxidized and no amount of buffing can bring back the original color.  There is so much original paint remaining that this will not be repainted, but left 'as is'.

Another nice item is the original wick.  It has orange thread running down both outer edges of the wick.  The weave and feel of the cotton wick is superior to the new wicks that are produced today.