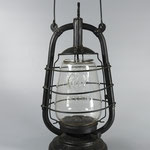 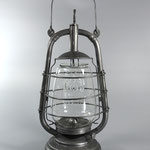 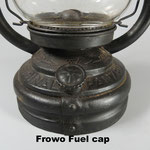 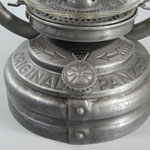 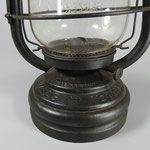 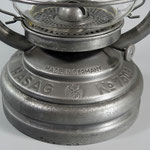 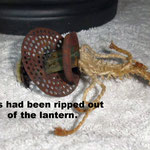 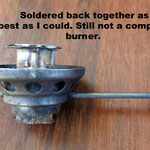 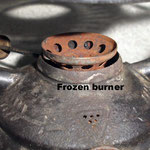 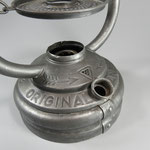 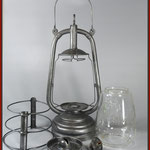 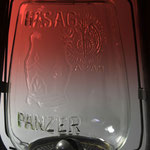 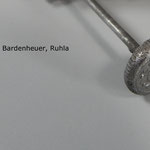 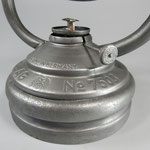 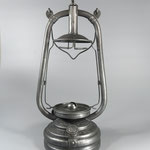 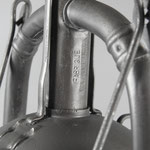 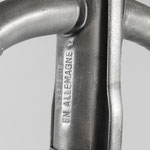 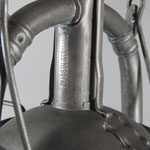 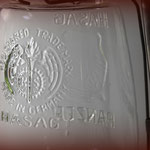 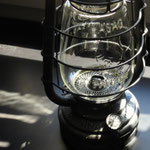 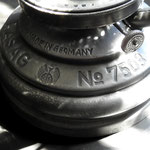 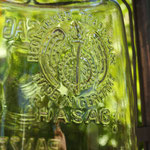 This is not only a difficult lantern to describe, but also difficult for me to try to present it accurately.  You will notice several different markings on this lantern which are somewhat confusing.  It has the following marks on it:

4. On the chimney tube is 'MADE IN GERMANY' and on the other side of the tube is Fabriqué en Allemagne'.  That is French for Made in Germany.

"Hasag initially had the model 'HASAG PANZER 7503' which was made by K&T.  It is identical to the Panzer Sturmtrotz 7503 made by K&T.  From roughly 1935, no more lanterns were being produced by K&T so Hasag had the Lantern produced by Stübgen. *Source Achim Stübgen

It has a Frowo fuel cap which would not have been original to the lantern unless those were the parts available at the time this lantern was produced.

1931: Hasag purchases the  lantern production from Kaestner & Toebelmann .  Hasag used the K&T tooling to produce the Hasag Panzer and Colibri during approximately 1933 - 34.

1932: Paul Budin, a member of the Nazi Party and a Sturmbannfuhrer in the SS, was appointed General Manager of HASAG. The company is now not only being led by Paul Budin, but almost every other higher position were members of the SS, SA and Nazi Party (NSDAP).

The lantern you are seeing was produced under the lead of SS Nazis with almost 100% certainty. What is also a very disheartening disturbing fact is that the majority of prisoners ('workers') were located in the city of Leipzig and everyone turned a blind eye as to what was happening.

More importantly, it should be noted that no HASAG personnel were put on trial at the International Military Tribunal (IMT) in Nuremberg. The Hasag Labor camps were responsible for an estimated 22,000 deaths. The number is most certainly higher as many of these people, who were too sick and ill to work, were sent to other concentration camps to die.  http://www.holocaustresearchproject.org/nazioccupation/hasag.html.

1935 - 1938: Germany is gearing up for war and there is pressure from the national government for efficiency and war production. The old family firm of Stübgen is taken over by Hugo Schneider. So now The HASAG brand of Schneider and the BAT brand of Stübgen are joined in the same company.

1944: HASAG was charged with the mass production of infantry rocket launchers and received Hitler’s thanks for its achievements. HASAG – Leipzig was also singled out as an “Exemplary National Socialist Enterprise.” In Germany, during the war, HASAG had eight plants in Germany.