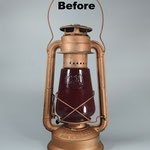 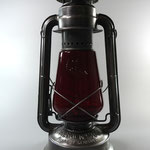 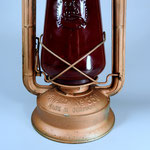 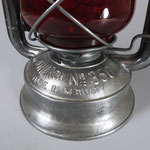 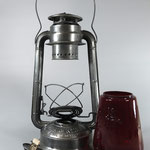 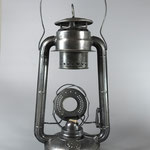 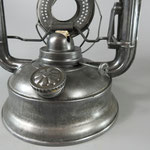 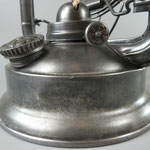 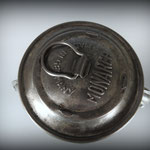 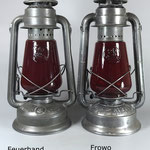 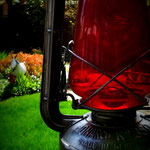 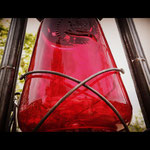 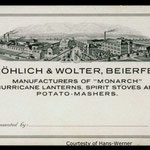 This lantern is the Monarch 350 which was made by Frowo for export to Canada.  Underneath all the gold paint was a multitude of 'sins'. The bottom of the tank was riddled with holes and there was also a fairly large hole in the side of the fuel tank.  All restored and sealed now.

Apparently, this gold paint was the original paint as Frowo would use Gold paint on these lanterns and continued to do so through the 1940's.  Had the condition of the paint been much better, I would have left it and not stripped it off.

The globe is a very old Feuerhand globe which still has is interesting in that has signs of black glass coloring in it. Most likely it was made right after a run of Feuerhand 'black out' globes and this globe was tainted with some of the black color.  I do not know if the original globe would have been embossed with the word 'Monarch'.

This a huge lantern and stands approximately 14.75" tall (excluding the bail). SEE THE LAST PHOTO IN THE GALLERY SHOWING THIS LANTERN NEXT TO THE FEUERHAND Nr. 262 model.

Frowo used their own models that were stamped with 'Monarch 350'. The fuel cap and wick driver has the typical Frowo 'flower' logo on it.  This is actually a Monarch 360 mounted on a Monarch 350 fuel tank.  It is an unusual combination and it is unclear as to why Frowo did this.

These models are not commonly seen.