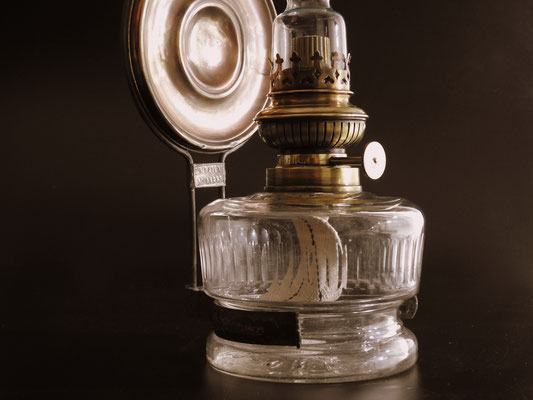 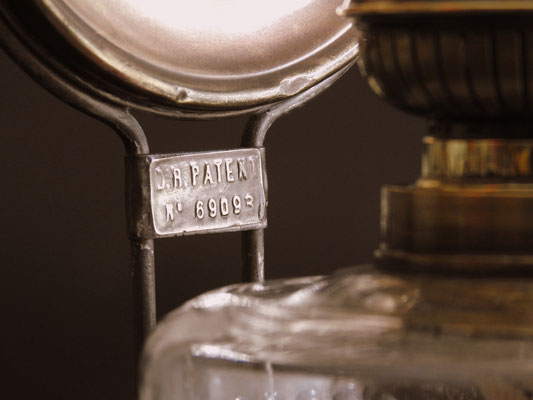 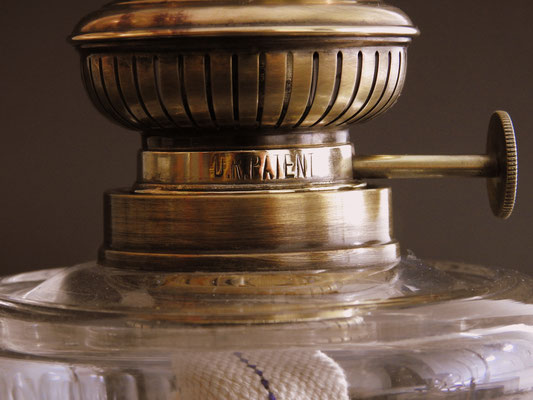 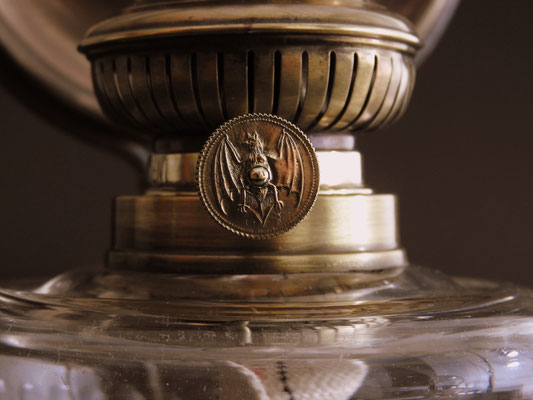 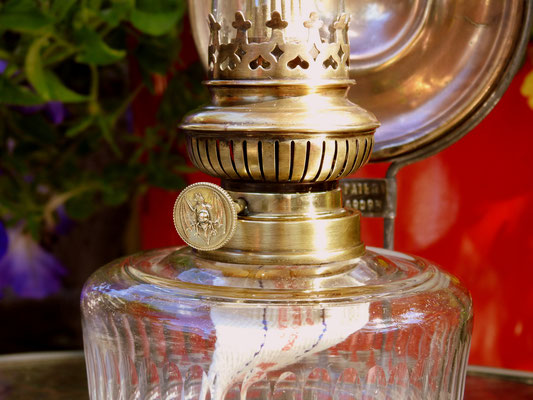 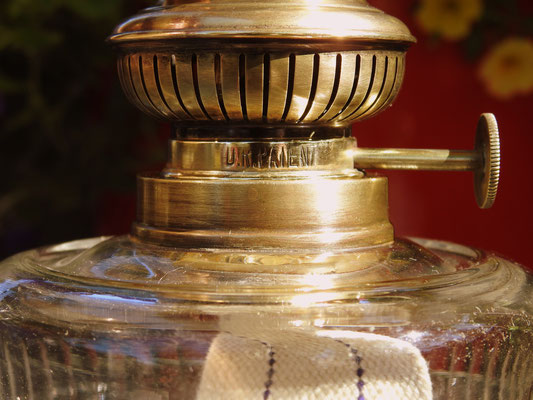 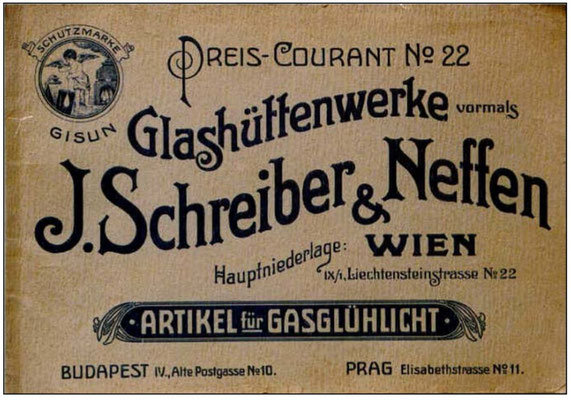 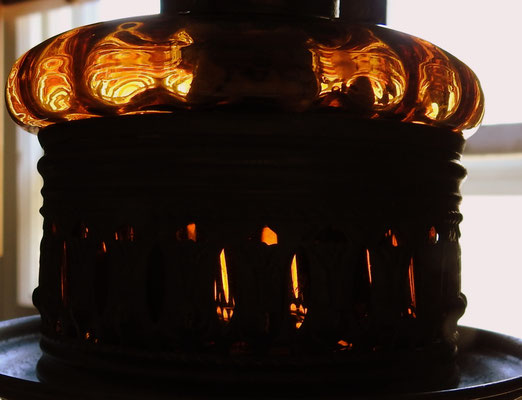 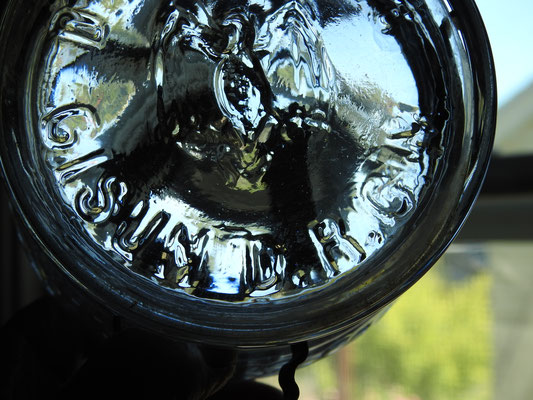 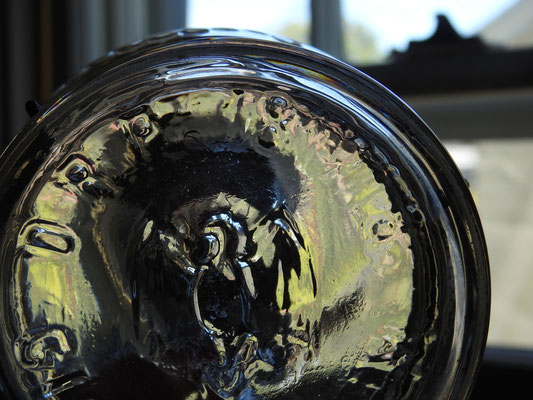 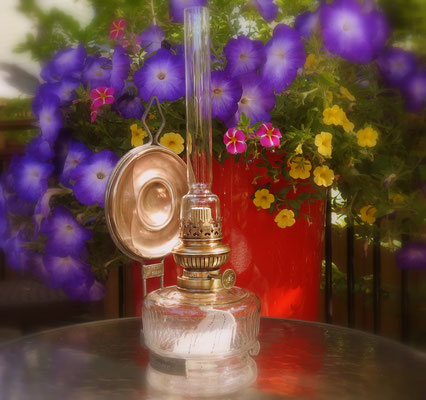 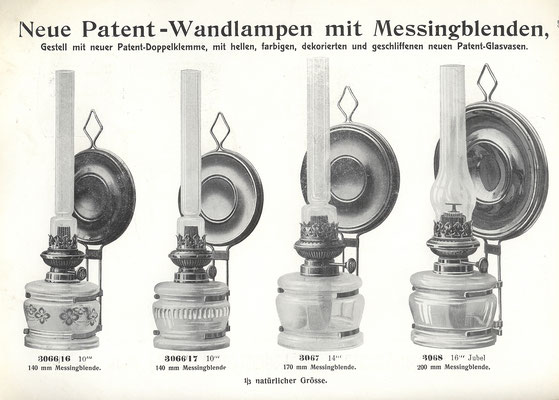 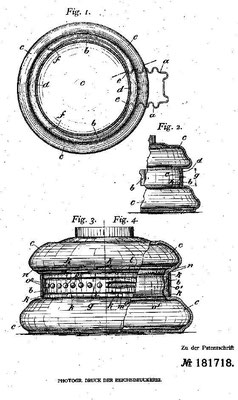 This is a beautiful and rare Fr. Stübgen Kerosene Wall Lamp. What is extraordinary about this lamp is the glass fuel fount. The lamp is signed under the bottom of the petroleum tank. In the middle the company logo, the bat. Around in a circle: D R P 1817/18 GISUN D.R.

"Gisun is a trademark of Schreiber and nephews. The world famous company “Josef Schreiber & Nephews ”and thus also the glass factory in Rapotín has a presence at world and industrial exhibitions in the 2nd half of the 19th century. (since 1862) developed in stages. The lively commercial activity and the considerable rise on a worldwide scale also had a negative impact on the company's situation. This was heavily indebted and faced financial difficulties, which is why it was converted into a stock corporation, formerly J. Schreiber & Neffen ”with headquarters in Vienna in 1897." Source: Dan Bjorn Landschoof

"The glass basin (tank) is from Stübgen. (Meaning the tin holder for the glass fuel tank) . D.R.P. 181718, which means German Reichs Patent No. 181718. This is not about the glass, but the mounting of the reflector on the glass using a special clamp. The patent is from 1906 and after the First World War these lamps were no longer produced. So it was probably made between 1906-1914." Source: Achim Stübgen

When I received the lamp from Ochtendung, Germany, it had the wrong reflector and Kosmos burner. With the incredible generosity of Dan Bjorn Landschoof, he supplied the correct reflector and beautiful Bat burner which is a 10''' burner. It is now complete and accurate.

The catalog drawing for the Patent number was kindly submitted by Ara Kebapcioglu
"Here is the drawing for German Reichs Patent #181718 (no slash in the number). Described is the metal clamp."

*PLEASE NOTE THAT IN THE CATALOG IMAGE ABOVE, THIS IS FOR A REFERENCE ONLY TO SHOW THE OTHER OLDER, SIMILAR LAMPS THAT STÜBGEN PRODUCED.