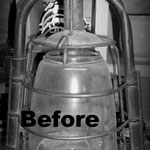 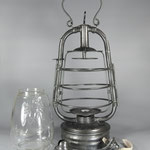 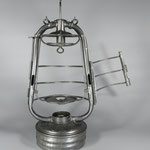 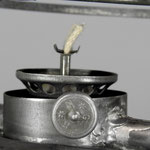 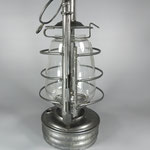 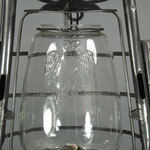 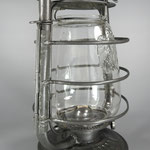 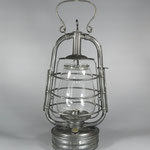 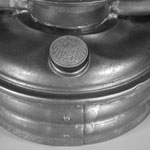 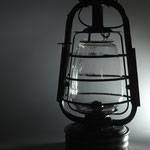 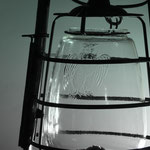 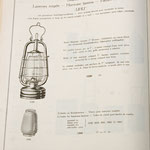 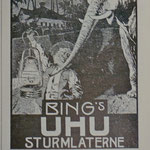 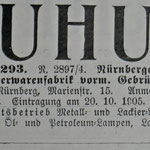 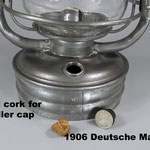 Gebrüder Bing company was founded in 1864 by the Ignaz and Adolf Bing brothers.  The company became the world's largest toy manufacturer from the initial metalworking to the beginning of the 20th century. In the wake of the global economic crisis, the company went bankrupt in 1929.

The company initially went under the name Gebrüder Bing (Bing Brothers) and by the initials GBN (for Gebrüder Bing, Nürnberg), and after the death of Ignaz at around the end of WW1, switched to the name Bing Werke (BW).

'UHU' = OWL EAGLE (In English)  *The owl globe you are seeing is NOT original to the lantern.  There is another model of a Bing lantern which has two owls and the initials 'UHU' embossed on the fuel tank.

The filler cap has long been lost and there was an old cork in it's place.  I could not save the cork as it was so deteriorated.  Rather than not have a filler cap at all, I took a 1906 Deutschmark Mark coin and attached it to a cork and rubber sleeve.   This coin would have been in use at the time this lantern was produced (1905).

One of the outstanding features of this lantern is that the cage opens up like a door.  You raise the metal rod on the left hand side and the cage will open.  It is hinged on both sides.  It works extremely well for access to the burner and the globe. Given the age of this lantern, it is in wonderful condition.

A very special thank you to J. Wekenmann for bringing this lantern into my collection and for the images of the old documents above in the photo gallery.